In continuation of our latest articles on a series of International Days devoted to raising awareness of the challenges intersex and asexual/aromantic folks face in their everyday lives and of their political claims, this week’s blog post is all about the Transgender Day of Remembrance (TDoR), an annual observance on November 20. Let’s start with some historical background. TDoR was co-founded in 1999 by the transgender activist Gwendolyn Ann Smith whose activism goes back many decades. Smith ran the Transgender Community Forum on AOL, one of the first public online forums for transgender people, and since 2000, she has been a columnist for the Bay Area Reporter writing on gender and sexuality issues among others. Before the TDoR, she was the brains behind the website Remembering Our Dead, a digital memorial site dedicated to people killed as a direct result of hatred and prejudice based on their gender, dating all the way back to the 70s. In 1999, the TDoR has gone online with the same purpose: publishing information about people who have been murdered due to anti-transgender violence. The website of TDoR hosts a list of the names of those who lost their lives from November 20 of the former year to November 20 of the current year and includes other actions, such as candlelight vigils, memorial services, and marches. This whole endeavor has started as a vigil to honor the memory of Rita Hester, a transgender African American woman who was killed in 1998 in Massachusetts because of her gender identity. According to Smith herself,

‘Transgender Day of Remembrance seeks to highlight the losses we face due to anti-transgender bigotry and violence. I am no stranger to the need to fight for our rights, and the right to simply exist is first and foremost. With so many seeking to erase transgender people -- sometimes in the most brutal ways possible -- it is vitally important that those we lose are remembered, and that we continue to fight for justice.’ 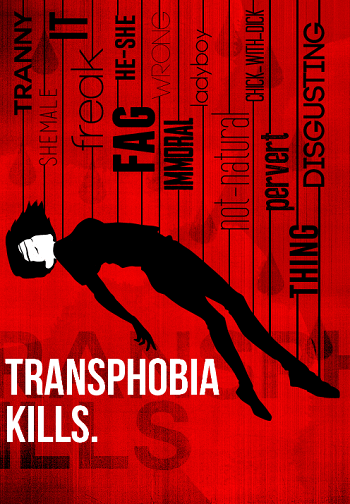 Twenty-two years later, Smith’s words resonate stronger than ever as we are witnessing a surge in transphobic violence. What sets this day apart from the rest of International Days that touch upon the LGBTIQA+ community is the fact that it is primarily about the remembrance of the horrific transphobic crimes committed against trans people that ended up in their death. It is not an awareness day like any other that promotes the visibility and representation of disenfranchised groups, but a memorial that testifies to the utter invisibility and the total absence of representation that death is. It concerns the most radical form of social erasure, that of murder. In other words, it reminds us of the mere fact that transphobia kills, that interpersonal violence and systemic oppression can lead to the literal eradication of trans existence. 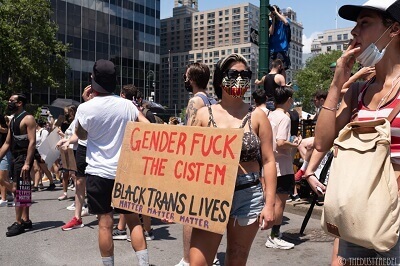 According to data published by the Transrespect versus Transphobia Worldwide (TvT) research project and gathered through the Trans Murder Monitoring (TMM), 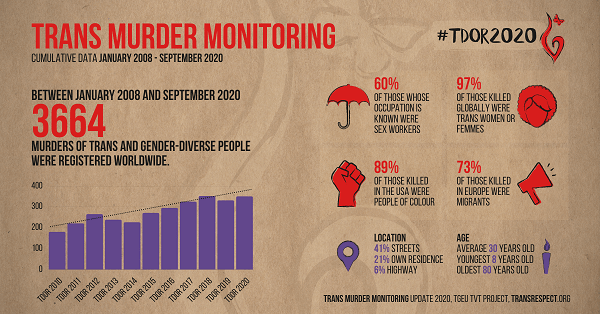 Regarding 2021, four months ago, the Human Rights Campaign recorded at least 28 killings of transgender and gender-nonconforming people up to that time in the USA declaring 2021 to be the deadliest within the last six years. In addition, most of these hate crimes were committed against Black and Latina women. In the majority of cases, trans persons were fatally shot or killed by other violent means making these crimes extremely heinous. It must also be highlighted that most of the hate crimes against trans people remain unreported or misreported further contributing to the silencing of the victims even after they pass. On top of that, in some cases, the family and friends of the victims hide the true gender identity of the victims by deadnaming or misgendering them. 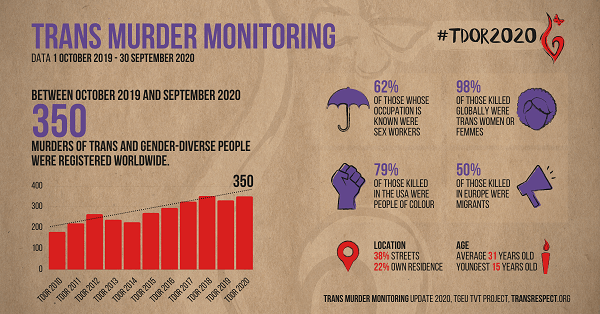 It seems that trans existence continues to be erased by multiple and interlocking axes of oppression. Another conclusion to be drawn from these reports is that an intersectional approach is much needed if we are to tackle transphobia in all of its manifestations, an argument that has been put forward by prominent trans activists such as Silvia Rivera and Dean Spade. And that’s because it is obvious that the stigma of transphobia interacts with and intensifies both the racism that trans people of color face and the stigma sex work bears since trans women who are sex workers or migrants or belong to an ethnic minority are at higher risk of falling prey to murderous violence. Unfortunately, color blindness is a disease that plagues the LGBTIQA+ community, even the TDoR itself that tends to recognize as legitimate the transfeminine bodies of color only in the aftermath of their deaths.

On our part, Ecce Homo is committed to the longstanding and substantial support of the trans community as the ‘Greek Transgender Support Association’ had been an important community partner, member of our CSR program. The Association is a volunteer-based NGO founded in 2010. Its goal is to promote the equal treatment of all Greek people based on their gender identity and gender expression or characteristics, the abolition of all forms of discrimination that trans and intersex people face on a daily basis, and the development of a solidarity network via publications and online material, public events and debates, the constitution of scientific and advisory committees, and organization of conferences and workshops. Among its recent initiatives are the provision of free legal counseling to trans and intersex people and to LGBTIQ refugees, the campaign ‘Breaking the Silence’, and the ‘Help at Home’ program.

Compton’s Cafeteria Riot
A for Asexuality