I’ve been waiting for sooo long to write this blog post, a somewhat unusual entry in terms of fashion blogging. Why? Cause I’ve decided to talk about three things that I love the most in this world: queer fashion, queer theory, and DRAG! I promise to use as fewer fancy words as possible (pinky swear😊). However, the event that has triggered this piece of writing is a sad one, and it has to do with this lady. 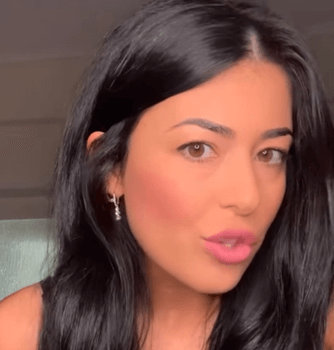 Let me give you a bit of a context first. A few days ago, a Greek right-wing politician named Afrodite Latinopoulou posted on her Instagram page a video in which she heavily criticizes women and men who do not blindly comply with the dominant standards of beauty. The occasion for her sexist tantrum was the following picture that the daughter of the USA vice president Kamala Harris, the model Ella Emhoff, has posted online showing off proudly her armpit hair. For Latinopoulou, this defiance of 'traditional' gender expression of women in particular constitutes 'the end of all that we have been taught, the end of the society itself'. 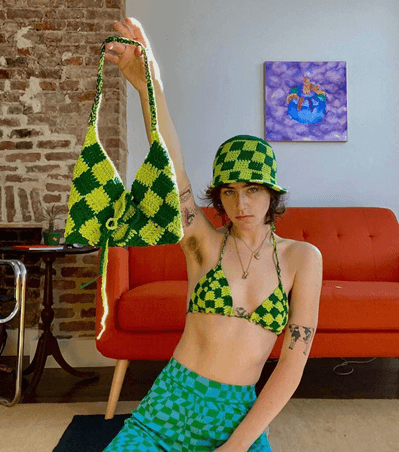 Ecce Homo against the policing of our bodies

Following the immense buzz Latinopoulou's statements have sparked on national television, news, and social media, Ecce Homo, that stands against the policing of our bodies and in favour of body positivity, has decided to step in and make an intervention in the public sphere the best way we know how! We took a series of pictures of our beloved drag queen jsniffany imitating Latinopoulou on her viral by now video post. This way we have created her alter ego, a drag persona named 'Afrodite, the Mother Queer', accompanied by the motto 'F🏳️‍🌈ck fashion police' in order to playfully subvert the initial sexist message.

This is but one instance where drag and queer fashion join their fabulosity in the fight against heteronormativity under the guise of ‘natural’ physical traits of women and men, and their ‘normal’ gender expressions. Once again, the invaluable lesson of feminism rings loudly in our ears, and incidents like the abovementioned make apparent that this message is still relevant today despite the recent victories of the #metoo movement. Counting already more than four decades, the second wave of feminist movement has put forward the distinction between sex as biologically grounded and gender as socially constructed. As the argument goes, if gender is the product of culture and not a matter of anatomy or genes, then the repressive gender stereotypes could have been otherwise and as such challenged. 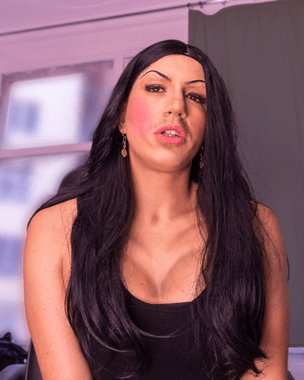 Building on and extending this idea, Judith Butler, the mother of queer theory, has argued that gender is performative, namely something one does, and not something that one is, a constant and unconscious repetition of highly stylized bodily acts that follow gender norms in a mode of belief which has been rehearsed like a script. Gender is a doing which over time produces a gendered self, rather than a gendered self who acts according to its natural sex. Moreover, this cultural construction of gender as strictly binary further legitimizes heterosexuality as self-evident, natural and compulsory for those who want to be part of the heteronormative society. And the famous example that Butler uses to clarify her views on gender is drag!

Just bring in mind RuPaul’s viral quote ‘we’re all born naked; the rest is drag’. Fashion is a way to grasp the performativity of gender, and it is no accident that fashion is an integral part of drag itself and vice versa. One could even argue that all fashion is drag as RuPaul seems to argue. Yet, Butler urges to be careful about the limits of the metaphor of gender as drag. We don’t wake up every morning picking our gender just like we pick a T-shirt from the wardrobe. Gender is not only one of the most personal way in which we make sense of ourselves, but also a way of relating with others. In many cases, we desire another person because they bear certain characteristics that are deemed gendered. On the other hand, we usually feel desirable or sexy when we comply with certain beauty standards that inevitably reinforce stereotypical gender expressions, for example the Marlboro Man or the Barbie Woman as archetypical beauty figures. Imagine the performance of a drag queen or a drag king wearing a wig or a moustache, heavy makeup, over the top feminine or masculine costumes, moving in a certain way, talking with a certain voice, using certain expressions. 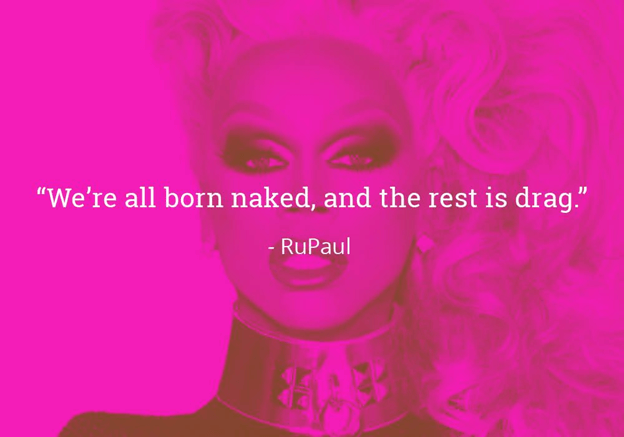 Drag makes literal what Butler call gender performativity in fancy words and what each one of us does every day without even realizing it, that is ‘pretending’ to be a man or a woman. Watching a drag show for the first time was an apocalyptic moment for me as queer teen (yes there are queer kids, and yes kids have a sexuality). All of a sudden, I felt this artificiality of my own gender expression. I am in drag each moment of my life to the point that this imitation of the ideal masculinity or femininity has become a second nature to me. I have always felt short in comparison, but I came to realization that not only are these gender ideals insidious policing mechanisms rooted deep inside my soul, but also, they are unattainable by default. It is this feeling of not being good enough at being a man or a woman that keeps us endlessly striving to embody these ideals. At the same time, as an ‘effeminate gay boy’ it became clear to me that the regulative ideal of masculinity in my case wasn’t just an injunction to move, talk, dress and love in a certain ‘masculine’ way whatever the hell that means. Along with the deepening of my voice and my wearing of rough jeans, a set of norms of how I should feel and think and desire and love accompanied this policing far beyond the discipling of my body. I had to be strong, selfish, rational, ambitious, emotionally distant, etc.

You know how the story goes. You are accidentally born with a weenie between your legs and even before you come into this world a blue room and a balloon with ‘it’ a boy!’ tag on it is waiting for you. As you grow older, you get conditioned to play certain social roles, cultivate certain personality traits and suppress others. And of course, from this sex and gender assignment a certain mode of desiring is expected from you: who gets you turned on, how you should feel beautiful, sexy and desirable, how to fuck or to be fucked. 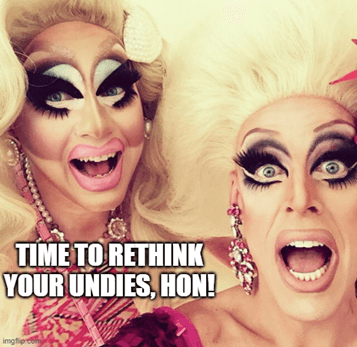 Despite their seemingly private character, undergarments play an important role in all the above. I just think of the first ‘properly male’ undies my mamma bought for me as a kid, how I keep on buying the same type of underwear just out of habit, how at some point I consciously bought a certain type of sexy underwear designed to emphasize my penis because of an ad I saw somewhere on the internet with a hyper-masculine/muscular dude that has ‘all the chicks at his feet’. Unfortunately, the exact same gender logic is uncritically reproduced among gay men, what we have learnt to call homonormativity.

Having said that, time has come to talk about RuPaul's Drag Race, the American reality competition television series hosted by the one and only RuPaul! Since 2009 thirteen seasons have been aired and numerous awards have been earned making it one of the most popular and critically acclaimed shows of the past decade. Beyond the small screen, the show has sparked a renewed interest in the drag worldwide acquiring this way the status of a cultural phenomenon. In addition, drag has become a casual topic of discussion among gays and straights alike, an indispensable part of every decent club’s routine, and most importantly a new sign of queerness.

However, drag, despite its embracing of gender fluidity, has become highly commercialized losing this way the subversive character it used to have, and which Butler had in mind in the early 90s. The absence of drag kings (women in drag as men) and the underrepresentation of trans folks are striking examples of the co-optation that the drag has undergone from its revolutionary counterculture roots to a mere tv product. It is telling that the same gays that write on their Grindr profiles ‘no femmes’ are the ones who are obsessed with the show’s drag queens. In other words, being a femme gay is ok as long as you are in drag. Masc on the streets, queens on TV! On the other hand, drag has become a marketing gimmick, another difference fully aestheticized and commercialized in the service of a voracious market for which an extra bit of strass and extravagance could sell products and build influencers (Rainbow capitalism alert🤑). Has drag lost its revolutionary potential somewhere along the way?

In Ecce Homo, we believe that gender is a fluid performance, and we design our underwear having in mind that they are a means available to anyone to craft their unique gender and sexual identities. For Butler, as we have seen above, gender is a performance that creates the illusion of a natural essence via the repetition of bodily and emotional habits. At the same, it is this incessant repetition that creates an opening for alternative gender performances, when we become conscious of these taken-for-granted habits. Designing our clothes, we follow the same logic hopefully in a way that queers gender and exposes its artificiality. These identities are paradoxically at the same time highly regulated and constructed by the culture, and yet they are being felt as natural to many of us. All we want is to make you become again conscious of your underwear by challenging your assumptions.

Stay tuned, be queer, and may the goddess of drag be with you!

The Pride Spirit lives on
‘Two genders that fit all’