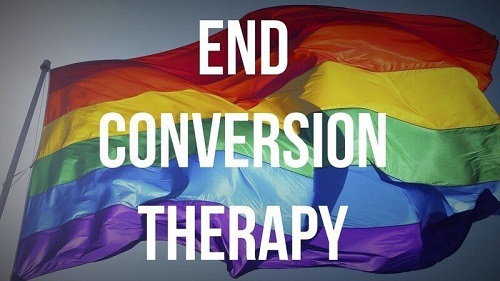 Two days ago, on April 1st, it was announced by the UK government that the so-called conversion therapies will be banned for gay and bisexual persons in England and Wales but not for transgender persons. This news was met at first with relief since the government a few hours ago had announced that this legislative move would be dropped entirely and alternative -non-legislative- ways of stopping these practices would be explored in the future. Yet, soon enough the ‘not for transgender persons’ part was caught by the radars of LGBTIQA+ activists and MPs and was heavily criticized as another instance of state-backed transphobia, a petty solution to a major problem, an April fools’ tasteless joke at best. This case is far from an isolated one, but rather indicative of a larger problem that, despite our most cherished misconceptions we have of ‘ourselves’, is a thing neither of the past nor of ‘backward’ states, but it still haunts our queer-friendly ‘Western’ democracies whose progressiveness and democratic values are measured by their queer-friendliness among others. At the very least, it seems that we are faced here with a contradiction. On the one hand, the LGBTIQA+ rights in the United Kingdom are considered to be among the most advanced in Europe and around the globe, including same-sex marriage and joint and stepchild adoption. On the other hand, this picture of queer heaven on earth is stained by the lack of a ban on conversion therapies, a series of pseudoscientific practices of changing or suppressing the sexual orientation or the gender identity/expression of a person using psychological, physical, or spiritual means.

To be sure, this is only half of the picture, one that rests on the foreclosure of the specific ‘trans issue’ from the general ‘gay issue’ and on the totalizing and reductive view of the LGBTIQA+ community as being populated exclusively by gay and lesbian citizens. In the case of the UK, since 4 April 2005, as per the Gender Recognition Act 2004, transgender people are able to change their legal gender only on the condition that they hold a Gender Recognition Certificate (GRC) which requires that they must have transitioned two years before it is issued. Although it is not a requirement for sex reassignment surgery to have taken place, a 2020 report published by the European Commission characterized this long and soul-consuming legal procedure as amongst the worst in Europe with ‘intrusive medical requirements’.

The UK government has yet to change this law that puts the fate of transgender people in the hands of usually cisgender and ‘bureaucratic’ mental health professionals and doctors who are in the omnipotent position of judging the ‘authenticity’ or the ‘realness’ of one’s gender identity and expression according to heteronormative standards of how a man or a woman should look and behave like. The current law -whose reform was not the ‘top priority’ according to Ministers- rests on and further solidifies the transphobic view that being trans constitutes an abnormality, a deviance from the straight alignment of the ‘biological’ sex with the ‘social’ gender. This social, political, and moral judgment hides behind the seemingly neutral and scientific medico-legal terminology of the required diagnosis of gender dysphoria, also known as gender identity disorder. In other words, in order to be able to self-identify one’s gender, one must first submit oneself to the diagnosing of one’s gender for it to be judged ‘disordered’ in the very literal sense of not belonging to the dominant order of gender normalcy. The fact that the limited ban on conversion therapies by the UK government does not include trans persons but further legalizes their exposure and vulnerability to the transphobic medical gaze should not come as a surprise but rather as the logical extension of the state’s transphobia already in place. If gays and lesbians are ‘born this way’ and as such, they must be protected from violent attempts at changing their sexuality, trans people somehow choose to be this way and as such their subjection to harmful suppression of their gender identities should not be considered a crime. This transphobic logic is further fortified by a view of trans persons as inauthentic, duplicitous, and untrustworthy whose ‘use’ their gender as it suits them or in a permanent state of identity crisis that needs to get straightened out. If sexuality is permitted to be oriented towards different genders, gender itself is the bedrock of one’s identity, something unchangeable and given, a criterion of mental health and social stability. Despite the criticism this exception to the ban of conversion therapy has received by LGBTIQA+ activists, this transphobic rhetoric is tolerated, when not outrightly reproduced, up to a point within the queer community itself. 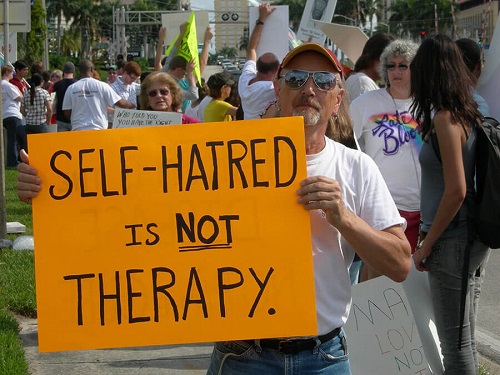 When it comes to the so-called LGBTIQA+ community, despite the seemingly endless pluralization of the identities that fall under this acronym, this linguistic move does not necessarily translate into greater visibility or inclusivity of the diverse groups in the alleged ‘community’ that the acronym denotes. And this is perhaps the first implicit assumption of the ‘movement’ that the mere existence of transgender folks calls into question, namely the equal recognition of the groups of people that each of these capital letters stands for, and the concomitant homogenization of their experiences of discrimination and harassment, and hence the flattening out of their different political claims. In reality, not only lumps the LGBTIQA+ acronym awkwardly together a number of different identities that recognize themselves in relation to either gender or sexuality or both, but it also obfuscates the fact that there is a hierarchy of these identities that ends up silencing the voices of some of the groups as less important undermining this way the very notion of community to begin with.

One such group of people underrepresented by this ‘community’ are trans folks who in many cases remain invisible and are not afforded the solidarity and support of the other members of the community. Yet, we need not lose sight of the fact that gender and sexuality are inextricably linked to such a degree that it would not make any sense to claim that the transgender identity is all about gender, whereas the gay identity -for example- is merely about sexuality. Gender is itself sexualized, and sexuality is highly gendered in a way that a distinction between these two notions could only be a theoretical one that does not correspond to the lived and embodied reality of everydayness. The fact that conversion therapies will continue to be legal in the UK -as it seems for now- only for trans persons sadly points to a certain pattern in the painful history of pathologization of queer persons according to which the de-pathologization of gays and lesbians has come hand in hand with the re-medicalisation of trans persons in terms of mental health. Gender studies scholar Abram J. Lewis (2016) spots such a ‘trade-off’ in the intersecting histories of the antipsychiatric and Gay Liberation movements from 1968 to 1980. In his study, Lewis shows how removing in 1973 the diagnosis of ‘homosexuality’ from the Diagnostic and Statistical Manual of Mental Disorders (DSM), a text that has since become the definitive mental illness classification handbook for clinicians and researchers worldwide, was followed by the introduction of the gender identity disorder as a diagnosis for the first time in the DSM in 1980. For Lewis, such a movement was a strategic one that aimed at re-establishing both the scientific validity of psychiatry and a new regime of gender normativity. In his own words, ‘by emphasizing that atypical gender expression had no intrinsic relation—or even correlation—to sexual object choice, the depathologization of homosexuality was secured through a repsychiatrization of gender nonconformity’ (p. 92). Such an implicit rationale seems to be at work behind the ban of conversion therapies only for gays and bisexuals excluding trans persons. I guess we will have to wait and see how things develop in the case of the UK, but I have a gut feeling that history repeats itself and we have learned nothing in the meantime.

Stay tuned for more on conversion therapies coming up next in Ecce Homo’s blog.

Conversion therapies 101
Sex and the War