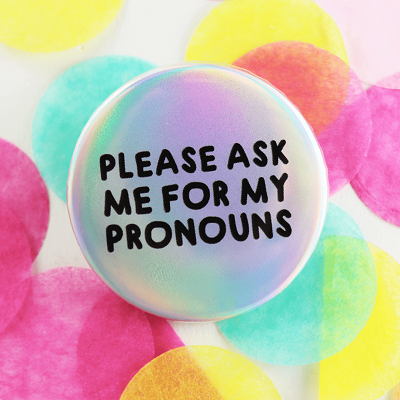 Since 2018, the third Wednesday of October is International Pronouns Day, and for 2021, this will be Wednesday, October 20, a day that Ecce Homo will celebrate with its friends and customers. As a queer underwear start-up, from the very beginning, we have gone to great lengths to make sure that both our products and the categories we use to describe and promote them are as gender-inclusive as possible. Along with our CSR program and our ecological sustainability development, being a body-positive and nonbinary queer brand has been an integral part of our corporate DNA, something that sets us apart from the existing underwear industry, something that we particularly take pride in! But why do the pronouns matter, to begin with? As we all know, English is a gendered language. The so-called grammatical gender is a system of noun classification that includes masculine and feminine categories. Whereas masculine nouns are words for men, boys, and male animals, feminine nouns are words for women, girls, and female animals. On top of this binary gender system, English does not have a gender-neutral or third gender pronoun available, and as such, this language does not leave room for other gender identities and expressions. Accordingly, she/her/hers and he/him/his are the female/feminine and male/masculine pronouns, that is words that are used instead of a noun or a noun phrase to refer to individuals, following the abovementioned string gender binarism.

But not all of us identify as a man or a woman, and this is exactly the point where the ‘grammatical gender’ turns out to be a societal imperative to comply with the hetero-patriarchal gender binarism that denies not only the plurality of gender identities but also the fluidity at the heart of each one of them. In this way, language, as the deepest expression of a culture, at times seems to be sexist or at least prone to be used as a normal, normative and normalizing disciplinary mechanism. Just take fashion, for example, an industry that is divided between men’s and women’s fashion. Our everyday fashion vocabulary is rife with gendered words that are based on a gender ideology that takes to be only two, antithetical and at the same time complementary, gender identities. To put it in other words, a woman and a man are the only two types of people that exist, a woman is what a man is not, a man and a woman comprise the harmonious sum of humanity, and finally, to be human constitutively means to be gendered.

It should not then come as a surprise that all these unexamined and taken-for-granted assumptions are really hurtful to many people who do not fall neatly into this gender binarism and its sexist presuppositions. These people might identify themselves as transgender, in transition, intersex, nonbinary, genderqueer, gender nonconforming, among many others, and they usually opt for what is called ‘preferred or personal gender pronouns’, that is, usually but not exclusively, the third-person pronouns in English (they/ their/ them). These pronouns are a way to bypass the gender binarism inherent in English, and an opportunity for any individual to communicate their personal gender identity or expression. A good practice both for institutions and in everyday social interactions is to ask for the pronouns used by the individuals themselves, which may involve using different pronouns at different times for the same individual, as a way of promoting equity, respect, and inclusion of gender-nonconforming persons. 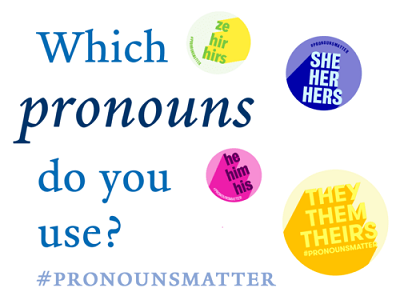 This is exactly the purpose of the International Pronouns Day that is coming up in a few days. According to pronounsday.org, where someone can find many useful resources, ‘International Pronouns Day seeks to make respecting, sharing, and educating about personal pronouns commonplace. Referring to people by the pronouns they determine for themselves is basic to human dignity.’ On the contrary, misgendering, that is, using the wrong pronouns, can be offensive or even harmful, since this way one reproduces the social oppression and the stigmatization of gender-nonconforming persons. In a sense, misgendering even denies the very existence of all those persons who do not belong to the gender binary, condemning them to social invisibility and silence.

Not assuming the gender of another person or using the gender-neutral pronoun (they/their/them) in situations where a person's gender is unknown, is not only an important step towards creating a safe space for everyone to feel comfortable in their own skin and flourish, but it is also an everyday harm reduction practice since the effects of misgendering can include, but are not limited to, feelings of anxiety and sadness, low self-esteem, negative body image, isolation from family and friends, and even suicide. Furthermore, one should not assume how someone identifies their gender based on their appearance since the gender expression, how effeminate or masculine a person is among others, is distinct from the gender identity, their inner sense of gender. On the other hand, using the preferred gender pronouns to identify a person without asking them first could amount to their outing in some contexts exposing them to discriminatory behaviors, harassment, or even violence.

In Ecce Homo, we take pride in breaking the gender norms with our fashion designs that do not reproduce uncritically the dominant, heteropatriarchal, notions of gender. Almost all of our designs are gender nonspecific, or nonbinary if you like, and could be worn by literally everyone. Subsequently, adopting the usual fashion lexicon to designate our products was not an option for us. So, we came up with our own fashion terms in an attempt to disassociate our designs from a biologized and binary notion of gender, and at the same to communicate the anatomical differences merely as a technical matter of fitting and size completely free of any gendered connotations. 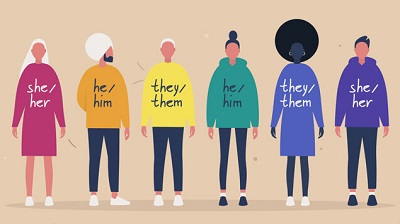 It should be noted that both our underwear and tops are suitable for people in transition and those who underwent a mastectomy in terms of materials and support, yet they do not contain internal pockets which are useful in some cases for securing the packers and the breast forms. We promise you that we are working on it, and a product line specifically designed for pre-operative trans men and women and those who underwent a mastectomy will be available soon at below-cost prices (before VAT) in the context of our Corporate Social Responsibility program.

By adopting this good practice when it comes to gender identities and expressions, Ecce Homo dares to make a difference in the LGBTIQ+ market by designing genuinely queer underwear for all genders and body types beyond gender binarism. Definitely, there are more to be done to battle stigma and discrimination based on gender identities, and this is only a first small step towards a more colourful world where everyone could wear their true colours!