Brokeback Mountain in the #MeToo era

Almost a year ago, in April 2020, Jake Gyllenhaal revealed a little Oscar backstage story featuring him and Heath Ledger, his late friend and co-star in the 2005 smash hit movie Brokeback Mountain during an interview with Another Man magazine. The film, that has become overnight an all-time classic of the new queer cinema, was an adaptation of Annie Proulx’s short story by the same name initially published in The New Yorker in 1997. Directed by Ang Lee, it was widely praised by the critics, and both of its protagonists earned an Oscar nomination for their performances as Jack and Ennis respectively, two cowboys in love in the American West from the 1960s to 1980s. Gyllenhaal and Ledger were proposed to do an opening for the 2007 Academy Awards telecast that included a sort of a joke at the expense of the ‘gayness’ of the love story, a joke that we are only left to believe that it might sound homophobic 15 year later.

According to the actor*,

It is in this context that the 2009 remarks of the author Annie Proulx during an interview with the Paris Review** hit the mark. Talking about the core essence of her story, she said that

Yet, she laments the fact that “many fans have decided that the story should have had a happy ending. They can’t bear the way it ends – they just can’t stand it" to the point that she wishes she’d never written the story in the first place. And this is, I believe, an argument worth revisiting today in spite of the progress achieved regarding LGBTIQ+ rights, at least in some countries.

On the one hand, occasional ‘innocent’ jokes -like the one narrated above by Gyllenhaal- are a powerful reminder that homophobia is still lurking not only under the radar of everyday casualness, but also under the shiny success stories of the ‘it gets better’ and the ‘gay marriage equality’ mantras of the mainstream LGBTIQ+ movement. Don’t get me wrong. The right to love whomever one wants and the legal recognition of such an intimate relation is undeniably a historical landmark, something quite unthinkable in the era that the Brokeback story is set. However, the fan fiction rewriting of the original story’s un-happy ending -cited by Proulx- seems to run in parallel with a stubborn reduction of the mainstream LGBTIQ+ politics mainly to a notion of privatized happiness at the expense of deeper changes in the invisible structures of sexism and homophobia which are left pretty much intact.

On the other hand, the putting into question of the toxic masculinity embodied in the old-age stereotype of the cowboy only recently has taken off thanks to the renewed discussion the #MeToo movement has sparkled within the queer community. And it is -among other things- the fascination with this unexamined ideal of masculinity attested by the long-lasting impact the story continues to have on its queer audience one of the things we should critically reflect upon. This ideal of masculinity marginalizes members of the LGBTIQ+ spectrum within the queer community itself, most notably the femininities, and the nonbinary and genderqueer folks. 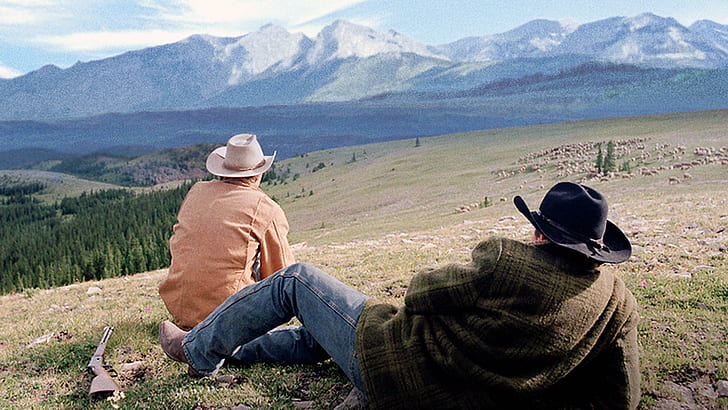 A moment from the movie Brokeback Mountain

This capturing of the queer imagination by the Wild West imagery is evident in the multiple appropriations of the cowboy aesthetic by the queer fashion industry. One of our bestselling product lines is inspired by the Brokeback Mountain’s legacy. Yet, Ecce Homo in tune with the times and highly conscious of the gendered and sexual representations it inevitably reproduces through its designs and its marketing strategy took a step further into radically queering this imagery.

Thus, we made both a Brazilian and a thong set, available in black, white and grey, and a bodysuit, available in black and lime. But there’s a twist here regarding our designs! Ecce Homo stands behind its initial decision to release all of its products with both space in front and flat front addressing this way folks of all gender expressions and blurring the rigid gender binarism, without resorting either to stereotypical gender identities or to gendered notions of anatomy.