A chronicle of repression and defiance

It all started on 13 September 2022 when a 22-year-old Kurdish woman named Jina was arrested by the Guidance Patrol at the entry of the Shahid Haghani Expressway in Tehran, Iran. She had traveled all the way from her hometown in Saqqez, a Kurdistan Province in north-western Iran, to the capital in order to visit her younger brother. She had just been admitted to the university hoping to become a lawyer someday. Upon her arrest, she was transferred to the custody of Moral Security Police, a branch of the Iranian Public Security and Intelligence Police that acts as an Islamic religious police center in charge of enforcing sumptuary laws or ending mixed parties by brutally arresting, imprisoning, torturing, and executing participants. It is to this Police department that the Guidance or Morality Patrol is subordinate. Her brother, who was with her at the time, was informed that she would be taken to the detention center to undergo an ‘education class’ and released an hour later. According to a 2017 statement by Hossein Rahimi, head of the Greater Tehran police, ‘those who do not observe Islamic values and have negligence in this area will no longer be taken to detention centers, a legal case will not be made for them, and we will not send them to court; rather, education classes to reform their behavior will be offered.’ This practically meant that Iranian women no longer face jail for dress code violations, but, as it turns out, the situation has not changed significantly ever since. 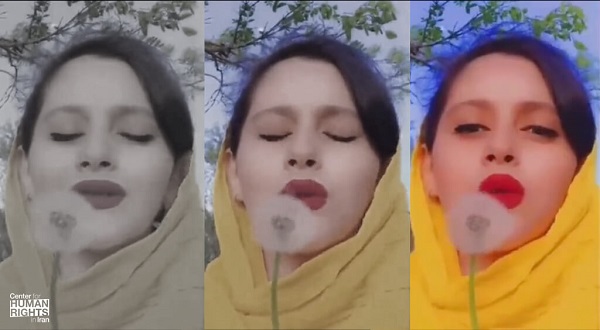 This was exactly the reason behind Jina’s arrest, this ruthless patrolling of the gender of women in Iran, that is for not wearing her hijab in accordance with government standards. The Iranian constitution defines the state as an Islamic republic and specifies Twelver Ja'afari Shia Islam as the official state religion. This translates to the fact that all laws and regulations must be based on ‘Islamic criteria’ and an official interpretation of sharia, and in this context not wearing the hijab in the appropriate manner constitutes not only a religious but also a legal violation. It should be reminded that hijab is an umbrella term for the many types of head-coverings or veils worn mandatorily by Muslim women who have reached the age of puberty. In many cases, the same term refers to a specific type, the one wrapped around the head, neck, and chest, covering the hair and neck but leaving the face visible. Three days later, Jina died under still unidentified circumstances at Kasra Hospital. According to the government’s official narrative, Jina had a heart attack at a police station and fell into a coma before transferring her to the hospital as a result of unknown prior medical conditions exonerating this way the Guidance Patrol from any misconduct during Jina’s custody. However, eyewitnesses, mostly co-detainees of Jina’s reportedly stated that she was severely beaten and that her death was the result of police brutality. These assertions were further supported by leaked medical scans and photos of the victim leading to the widespread belief that the real cause of death was a cerebral hemorrhage or stroke due to being subjected to torture by the Morality Patrol followed by serious negligence on the part of the authorities. 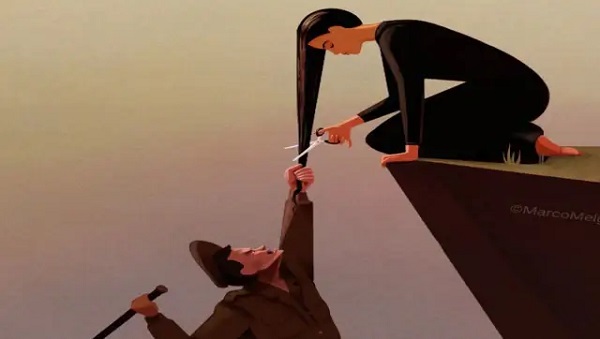 Jina’s death has been the spark for a series of protests and civil unrest across the country against the government of Iran to burst. In an attempt to contain the ‘spontaneous’ protests, the government implemented regional shutdowns of Internet access along with nationwide restrictions on social media. At the same time, the official narrative put forward by clerical rulers has been that the anti-government protesters are mobilized by foreign countries, such as the USA and Israel, in order to undermine Iran’s sovereignty, a well-rehearsed rhetorical strategy to divert people’s attention from the real societal and financial problems that have been plaguing the country for quite a time. Protesting for the rights of women on the occasion of Jina’s death has been part of widespread civil unrest since July 2021, which themselves followed the 2017–2021 Iranian protests, a series of political movements, civil disobedience, online activism, and demonstrations that since the mid-2010s have erupted nationwide in response to the Shiite political Islam and theocracy of the Islamic Republic of Iran. The most recent wave of protests also met with police violence, part of which is the ongoing women’s liberation movement has been fueled by the anger of the public facing water shortages, blackouts of electricity, and internet cutoffs, culminating in a deep financial crisis. 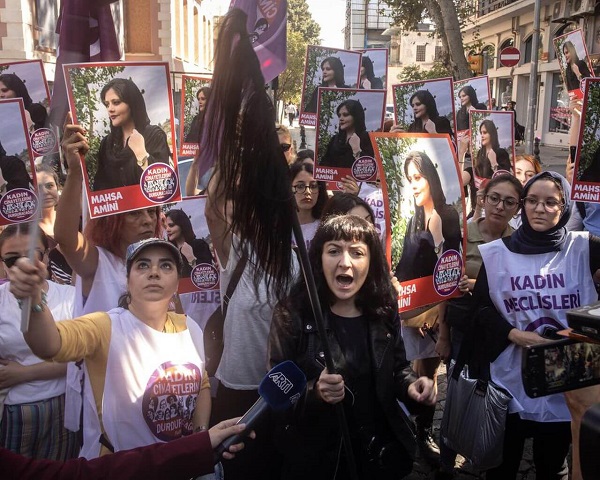 In other words, the current protests for women’s rights and against the compulsory hijab are not the first of their kind in the country, and rather, we might consider these as a part of a complicated and longstanding genealogy of the wider Iranian Democracy Movement that has been at the heart of the abovementioned Iranian protects. Let us bring to mind the Girls of Enghelab protests which were inspired by Vida Movahed, a fearless Iranian woman who stood in the crowd on a utility box on Enghelab Street (Revolution Street) in Tehran on 27 December 2017. Vida became the symbol of liberation and resistance by tying her white hijab to a stick and waving it to the crowd as a flag, resulting in her arrest. Back to Jina, during the protests her untimely and unjust death has given rise, more than 300 people have been killed as a result of the government's intervention in the protests, involving tear gas and live rounds, according to the first official word on casualties in two months. The unstoppable police brutality and state authoritarianism have been condemned around the world by both states and international organizations. Amnesty International said that ‘the circumstances leading to the suspicious death in custody of 22-year-old young woman, which include allegations of torture and other ill-treatment in custody, must be criminally investigated’, while, in Iran, the Center for Human Rights declared Jina ‘another victim of the Islamic Republic's war on women.’ 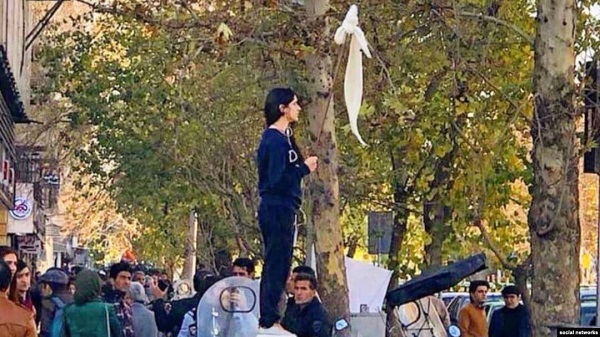 One of the most forceful means used by the Iranian state in this war on women is the so-called Morality or Guidance Patrol members of which are accused of murdering Jina and controlling women’s performativity of their gender, especially regarding the religious dress code and the use of makeup. This Patrol has a long history of biopolitical surveillance and control over the bodies of Iranian women ever since the 1979 Iranian Islamic Revolution and the founding of the Islamic Revolution Committees to serve as the Islamic religious police. As it is usually the case, sexism goes hand in hand with queerphobia in a hetero-patriarchal state, such as Iran. It must come as no surprise that the Guidance Patrol has also harassed trans women for lack of gender conformity, as Arsham, a trans woman, testifies on camera. Transgender people are still being beaten, attacked, and disowned by their families in Iran in spite of the country legally accepting transgender people, according to an eye-opening report by PinkNews. 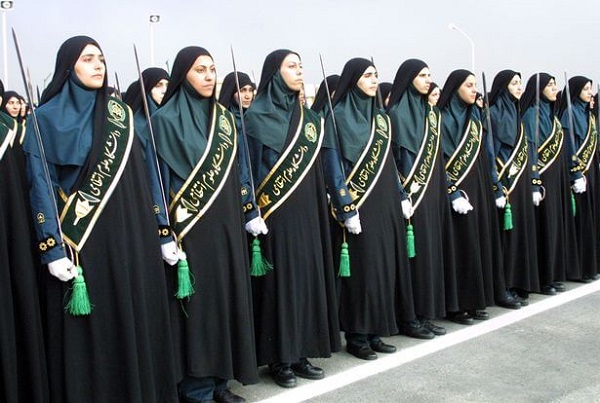 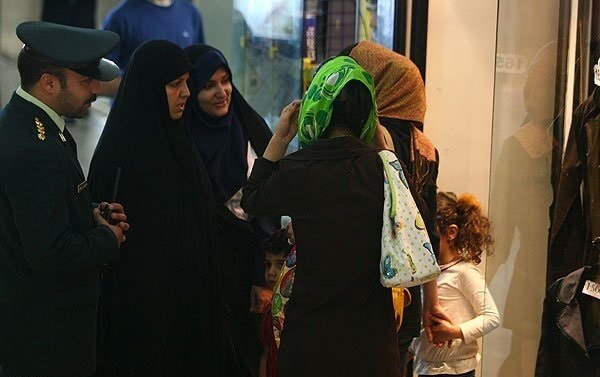 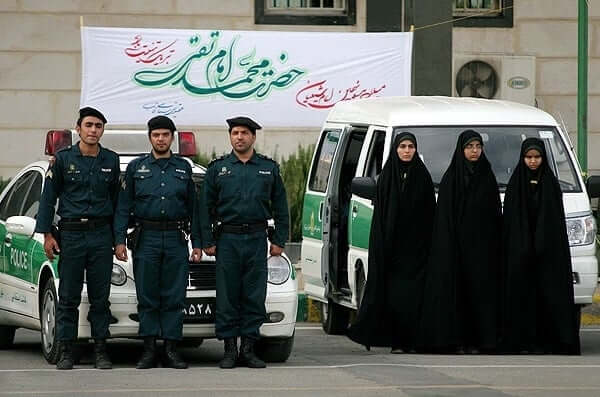 Over the last few days, there is uncertainty over the status of Iran's morality police after the Attorney General of Iran, Mohammad Jafar Montazeri, stated in Qom that the Patrol is not under the supervision of the judiciary system and is in the process of being disbanded, while the hijab law is under review. However, according to international analysts, this seems to be a tactical move to appease the protesters rather than a genuine reform in favor of women’s rights in Iran, while some even question the validity of the Attorney General’s statements since, as of 5 December, there has been no official statement regarding the disbanding of the guidance patrol by the Iranian government.

Postscript: The official Persian name given to Jina by a country that was ranked 140, out of 144 countries, for gender parity by the World Economic Forum's 2017 Global Gender Gap Report was Mahsa Amini. It is to her memory that this humble blog post is dedicated.

'The veil of ignorance'
Ep6. InterACT