The short history of an icon

Hello everyone! Another Saint Valentine’s Day has just gone by, and Ecce Homo’s straps were among our top-selling products! For our customers from all over the world, the strap seems also to be a popular underwear choice all year round, a fact that testifies to the extent that jockstraps have been historically an indispensable part of the LGBTIQA+ pop culture. In this blog article, we are going to revisit the history of this iconic piece of undergarment, its reappropriation by gay and bisexual men, and what makes Ecce Homo’s reimaging of this by now classic design stand out from the rest on the queer underwear market.

The history of jockstrap

The first jockstrap was an 1874 invention by C. F. Bennett, a designer of the Sharp & Smith sportswear company based in Chicago to cover the needs of bicycle jockeys working the cobblestone streets of Boston. The bicycle jockeys were something like today’s postmen and deliverymen but the bicycle-riding version! Yet, from the early 20th century this undergarment initially conceived to satisfy the everyday practical needs of workmen turned out to be quite useful for medical purposes, especially when it comes to the recovery from surgical operations and injuries, such as hernia and hydrocele.

Next to this medical use, the jockstrap was embraced enthusiastically also by athletes as a means to protect the male genitalia during physically demanding sports such as Hockey, Baseball, and Boxing from injuries, a sports gear to support and defend the male body often supplemented by a cup for extra protection. Some argue that the all-time classic brief in your wardrobe has been jockstrap’s predecessor! In either case, the jock- part of the word jockstrap can be traced back either to the slang term jock that stands for penis or athlete or to the jockey referring to the bicycle riders. It was only later in history that the jockstrap was appropriated by gay and bisexual men as a piece of lingerie. 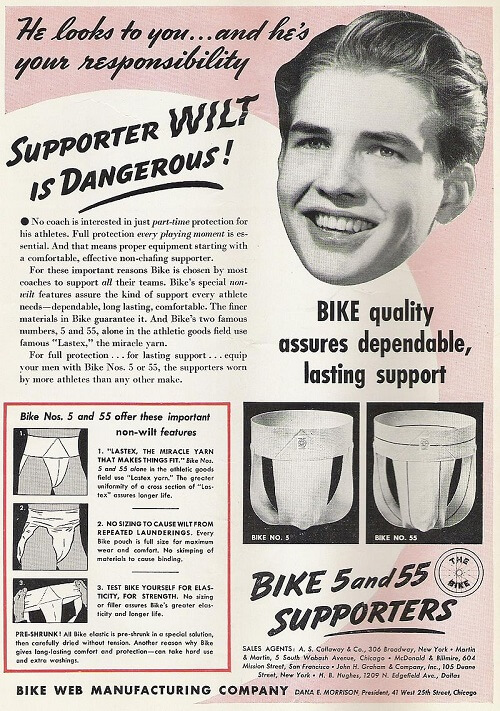 While in the 80s and 90s the popularity of jockstrap among athletes was in decline, this practical underwear has taken an unexpected turn towards fashion! Many men realized that a jockstrap could be used the same way as a pushup bra in order to lift up and accentuate their bulge and hence to increase their ‘masculine’ sex appeal. In this context, it should not come as a surprise that global brands like Calvin Klein and Diesel have adopted the aesthetics of the jockstrap. However, jockstraps have already been popular among gay men since the 50s when gay fashion and covert gay magazines like Physique Pictorial put forward a more masculine and athletic style as the ideal gay male body.
Since then, they have become a widely and wildly popular piece of underwear to the point of fetishism by being worn both by tops to emphasize their packages and by bottoms to show off their butts. One can see jockstraps everywhere: from Grindr to OnlyFans, a jockstrap is a sign of sexual availability, phallic prowess, old-time masculinity, and bottom empowerment, a site of irresolvable contradictions. Just bring in mind the so-called ‘Jockstraps Nights’, events organized by gay bars or clubs in major gay capitals around the world like London, San Francisco, and Berlin, where the patrons are required to wear nothing but their jockstraps!

Everybody knows what a jockstrap looks like, yet few people know that it also goes by the name jillstrap or simple jill when we are talking about the ‘female’ version of it. And yes, despite the association of jockstrap with the archetypal athletic or gay hyper-masculinity, jillstraps are pelvic protectors initially designed to protect ‘female’ athletes against the bruising and tearing of the female genitalia during an intensive workout. However, as it is usually the case with anything labeled as ‘typically male’ to begin with, jillstraps do not seem to be part of the LGBTIQA+ pop culture the same way jockstraps are. This invisibility of jillstrap may be due to the monopoly the gay ‘male’ body continues to enjoy as the only or at least the most visible object and subject of desire among the members of the queer community.

On the contrary, the lesbian ‘female’ body remains private and desexualized in a heterosexist logic that displaces only to the heterosexual ‘female’ bodies the burden of being sexually objectified as the only way to count as sexy or lustful. In this context, a lesbian with a jillstrap is considered to be mimicking a traditionally ‘male’ way of clothing via a highly gendered piece of underwear in terms of butch-ness. This sexist and homophobic reasoning ends up fortifying a series of misconceptions about lesbianism such as they-want-to-be-like-men-deep-inside type of thing. In Ecce Homo, we believe that some people feel at home inhabiting a certain gender, but for others, gender constitutes a prison of the body that are better off without. For this reason, we reimagined straps without jocks and jills, beyond gender identities as is the case for all of our products. Let’s make straps non-binary and body-positive!

TERFs and other evils
Intersectional all the way