THE HISTORY OF HIV/AIDS IN GREECE

In our previous blog article, part of our latest Made in Greece blog series in the course of which we are trying to map the landscape of LGBTIQA+ rights, activism, and culture in Greece, we pose the question of how the HIV/AIDS epidemic has influenced over the years the Greek LGBTIQA+ community. Such an endeavor is placed in the context of our former discussion of the key areas of LGBTIQA+ activism that are currently at the top of the agenda of Greek activists by presenting some of the most important LGBTIQA+ organizations that operate as we speak in Greece. In part 1 called ‘A short his-tory’, we set the terms of such an inquiry by focusing on HIV solely as a sexually transmitted virus and by narrowing our scope exclusively to the impact of HIV/AIDS pandemic on male homosexuals. As such, we presented the first two out of the three cultural conceptualizations of male homosexuality in Greece after the Second World War which continue to co-exist in tension until nowadays.

It became apparent that such a throwback to the history of male homosexuality in Greece is quite valuable today in order to put into question our most cherished assumptions about gayness. In other words, we might have a sense of our sexual and gendered self as something given and we might feel that our same-sex attraction is instinctual and natural, but we must not lose sight of the fact that any notion of selfhood and desire is both historically situated and culturally specific, something that we tend to forget in our globalized world these days. What we perceive today as the innermost truth of our self and desire is a social construction determined by both local and global influences, such as the specific culture of Greece and the global flows of capital. In what follows I hope it will become apparent that what we call queerness or gayness are none other than the most recent ways of being a male homosexual among many others around the world and throughout time! Without further ado, let’s pick up where we left off!

The third conceptualization of male homosexuality emerges in the mid-1990s and continues to be in cultural currency at least since the mid-2000s. According to Anna Apostolidou, ‘the experience of homosexual desire solely as transgressive/illicit practice gradually gives way to the emergence of gay as a realizable identity, one that is partly legitimate and accredited by a series of legal, medical, and more importantly societal and representational shifts’. This ‘gay boom’, as the author eloquently calls it, comes hand in hand with ‘culturally acknowledged systematic’ practices of self-disclosure (coming-out) that point to a direction of an identity formation, an affirmative ‘proud’ one this time, defined in opposition to the older practice-based identifications in a way that resignifies the traditional understanding of hegemonic masculinity via verbal and corporeal performances rather than incorporating it unproblematically. This public and respectable gay identity, that seems to differ from the ‘gei homosexuality’ of the previous decade that Yannakopoulos talks about despite being itself ‘imported’, ‘syncretic’ and ‘improvised’, seems to be the site of a distinct ‘gei’ culture and community and, even though it is still considered to be antithetical to ‘ellinikotita’ (greekness), the common Greek identity consisted of the three pillars of nationhood, religion and family, it manages to contest the latter as its symbolic constraint, its ‘closet’. Yet, it should be noted that Brian Riedel has a different opinion maintaining that during the same time period the dominant model of male homosexuality continues to be the traditional and not the ‘gei’ one.

Since the mid-2000s, the more recent work of Apostolidou and Costas Canakis attests to the consolidation of the signifier gay among Greeks in parallel with the near absence of the signifier ‘queer’ as identity marker with the exception of the discourse of academia and arts. One of the hypotheses this research project aspires to test is the emergence, as we speak, of a new transnational (queer?) conceptualization of male homosexuality in Greece as a result of the worldwide dissemination of cultural products, political ideas, and sexual practices, some of them in direct relation to the new biotechnologies of HIV/AIDS and the globalization of sex itself via digital technologies and pornography. Just bring in mind the impact Lady Gaga’s music videos on LGBTIQA+ youth all over the world. 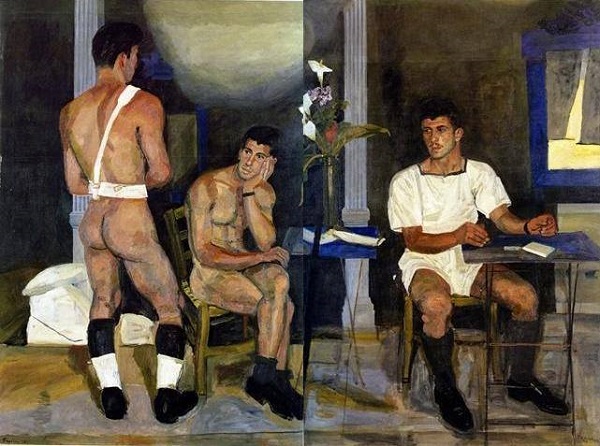 In line with this 'glocalized' character of the relatively recent conceptualizations of male homosexuality, both of the authors put great emphasis on the process of ‘institutional Europeanization’, as Efthimios Papataxiarchis puts it, in a national context that keeps on producing internal cultural others and on the ambivalent status of Greece oscillating between East and West. Finally, the role of kinship and reproductive heteropatriarchy as fundamental organizational principles of both the Greek society and personhood should not be underestimated given the recent calls addressed to young couples to reproduce and secure the survival of the nation. Having these in mind, the social representations and the ‘native’ conceptualizations of HIV/AIDS in Greece should be seen as mutually reinforcing and co-extensive with the ones of male homosexuality without underestimating the fact that such a relation is dynamic and partial rather than one of one-to-one correspondence. Two such telling points of intersection between HIV/AIDS and male homosexuality are the interpersonal ethics and the activist politics that has been developed in Greece over the last 30 years.

Regarding the first point, the ethics, both male homoerotic desire and HIV/AIDS are perceived as transgressions of the gendered and sexual order by exposing its ‘polymorphously perverse’ underside and resulting in the formation of stigmatized and spoiled identities based on processes of othering that construct both PLWHA and male homosexuals as morally corrupt while at the same time naturalize the symbolic link between them via a series of metaphors. This cultural logic works in tandem with the aforementioned mentality of ‘natural male sexuality’ that conceptualizes the ‘poustis’ as a type of person ‘who fundamentally lacks full humanity and his moral weakness exposes him to all sorts of evil dispositions’, according to Loizos and Papataxiarchis, and the ethnomedical ‘theories’ of disease aetiology that consider any biological disease to be the result of a sin, both of them imagined as ‘an intrusion of evil spirits that penetrate the body and render the person ill’, according to Plexoussaki and Yannakopoulos.

In other words, HIV/AIDS appears to be the punishment for the ‘immorality of the poustia…of the soul’, Yannakopoulos puts it, and it is in this context that Plexoussaki and Yannakopoulos describe a series of mechanisms of production of social difference in the 90s in Greece, in this cases the doubly marked identities of PLWA, like the intensive questioning regarding the ‘shady’ and immoral, as presumed by the doctors, ‘medical’ past of the patients, the corporeal practices of protection employed by the medical staff in their everyday contact with the patients and the construction of the patient’s ward at the hospital as a ‘dangerous’ place.

Stay tuned as we are going to delve deeper both into the ways AIDS patients were treated in the 90s in Greece and the political-activist response by the Greek LGBTIQA+ movement to this pandemic.

* The paintings presented here are by Yannis Tsarouchis, the gay Greek artist-provocateur, whose mid-20th century works of art explored homoeroticism.