Queer beyond identity: Against all regimes of normal 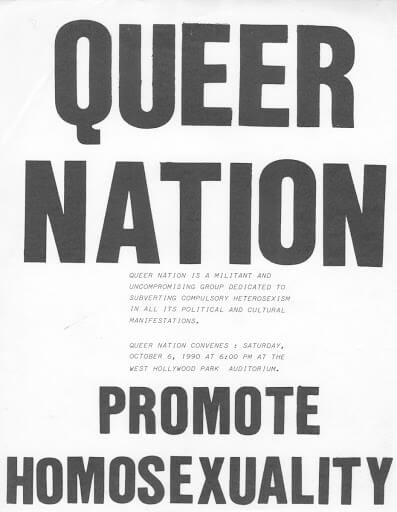 In our latest article, we discussed the famous acronym LGBTIQA+ and the work, political and social, this word does in the current landscape of gender and sexuality. It became quite obvious that this acronym has become the epitome of what is known as identity politics. Also, it seems that this term is malleable in the hands -or I should rather say in the mouths- of the speakers who use it as they adapt its contents to their purposes or their specific cultural understanding of gender or sexuality, yet at the same time, its wide circulation testifies to the fact of the internationalization of the identities it encompasses. Finally, we argued that, even though the pluralization of the letters of the acronym is proof of a larger historical and societal change, namely the fact that the queer community itself gets -as the time passes by- more inclusive, diverse, and accepting, this seemingly endless pluralization of identities does not necessarily translate into greater visibility or inclusivity of the diverse groups that each letter stands for in the alleged ‘community’ and it sometimes ends up obfuscating or even reproducing the different types of violence each of the groups it represents is subjected to. In this fourth installment of our new blog series on the history of the queer as a term, a theoretical approach, and a politics, we keep on navigating the historical trajectories, the linguistic vicissitudes, and the political ideas that queerness has inspired over the last 30 to 40 years. Our point of departure is this tiny capital letter Q in the acronym LGBTIQA+ that stands either for Questioning or Queer. We cannot help but wonder: is queerness another identity next to gay or intersex? This way we hope the differences, conceptual and political, between the terms queer and LGBTIQA+ will become obvious in what follows. Let’s bring in mind that queer as a term of positive -proud and loud- identification for sexual dissidents has re-entered our political, personal, and cultural vocabulary in the mid-80s in the context of HIV/AIDS activism. Both queer activism and queer theory of that time reappropriated strategically and parodically this up to this point injurious term, a century-old slur on gay men or anyone/anything weird, abnormal, or strange. Wearing this signifier as a badge of pride and defiance, these queers tried to transform this word from a site of queerphobic trauma and violence to a locus of political radicalism. The spur of this radicalism was a scathing critique of identity and its politics of the previous decades. But why was identity put under such scrutiny at this point in time? And why was such a severe questioning of identity as a means of political mobilization put forward specifically by sexual dissidents? To answer these questions, we are in a dire need of a bit of context! The early and mid-80s were turbulent historical times in the history of the USA. On the one hand, people were witnessing the rise of neoliberalism in the policies of Ronald Reagan’s administration according to which the dogmas of lesser state and laissez-faire have dictated ever since the relationship between the state and the free market, and between the state and its citizens. In this grim political and financial context, it is the competition that is announced as the most definitive characteristic of human relations, rather than solidarity. It was the private pleasure and interest the ultimate moral value. It was possessive individualism the dominant model of political and social subjectivity. And it was the responsible and careful individual the paradigmatic citizen. Also, at the level of political economy, neoliberal policies pushed for the deregulation of the free market and the privatization of a series of basic services previously provided by the welfare state, along with severe austerity measures. But Reagan’s tenure as the President of the United States from 1981 to 1989 was also marked by a forceful -Republican- neo-conservative turn that advocated for the traditional families values and a Christian way of life that must be protected from the Counterculture Movement of the 60s and the rise of the new social movements of the 70s, such as the anti-war, the feminist, the gay and the civil rights movement among others, that had questioned the American Dream and its racist and heterosexist values that sustained it. 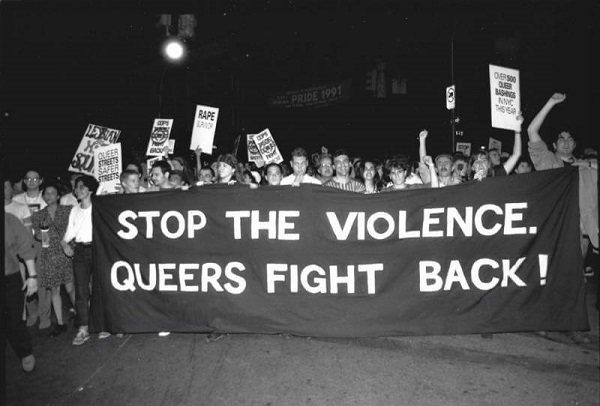 On January 20, 1981, the first inauguration of Reagan took place, and a few months later, on June 5, The U.S. Center for Disease Control (CDC) published an article in its Morbidity and Mortality Weekly Report (MMWR): Pneumocystis Pneumonia—Los Angeles. The article described cases of a rare lung infection in five young previously healthy gay men in Los Angeles. According to this report that all the men have other unusual infections as well, indicating that their immune systems are not working. Two have already died by the time the report is published and the others will die soon after. This edition of the MMWR marks the first official reporting of what will later become known as the AIDS (Acquired Immunodeficiency Syndrome) epidemic, an epidemic whose symbolic weight has unequally burdened the shoulders of gay men. One should remember that the Gay Liberation Movement of the two previous decades had already managed a series of victories against queerphobia. This way the HIV/AIDS pandemic and the concomitant homosexualization of the virus had as a result the undoing of this hard-won progress. The moment when gays started feeling proud, AIDS breathed new life into homophobia and dragged gays back to their closets. The dismantling of the welfare state and public health infrastructures by the neoliberal financial politics of Reagan along with the neo-conservatism towards heteronormativity only made things worse exacerbating the already precarious social position of gays. 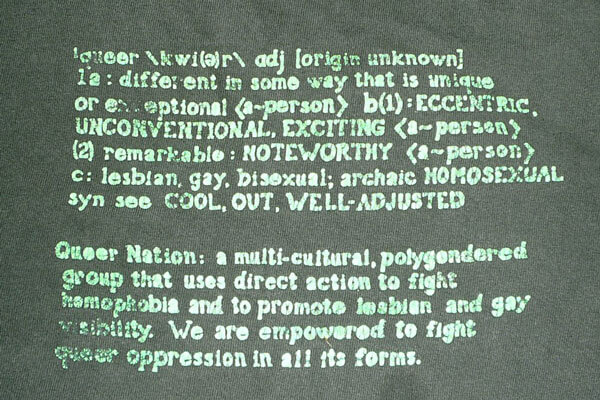 In this context, the identity politics of the previous generation of gay activism that demanded inclusion in the society and recognition by the state seemed to be inefficient to respond to these new challenges by a part of sexual dissidents. These politics of lobbying that were speaking the language of state officials were unable to question the terms of such inclusion and recognition. At the same time, the identities of gay and lesbian seemed to be too restrictive on a personal level, another closet within the closet of the society that fixes the polymorphous desires and reduces the multiplicity and dynamism of the gendered and sexual self to a set of prescriptions of how to be gay. Furthermore, a part of gays and lesbians seemed to be too comfortable in this new economic regime managing to be perceived as respectable by the straights thanks to their upwards social mobility, financial capital, or whiteness. Not only is the gay or lesbian identity fluid, but it also becomes apparent that any identity is intersectional. But queer politics took this argument further. Identity is the enemy of queer politics, the cage that imprisons us within certain parameters that we have never signed up for! Identity blinds us to what we really are and to what we could become. Identity stabilizes the political mobilization by fixing us to a new normative place. Identity even blinds us to what we share with others by accentuating the differences among us. 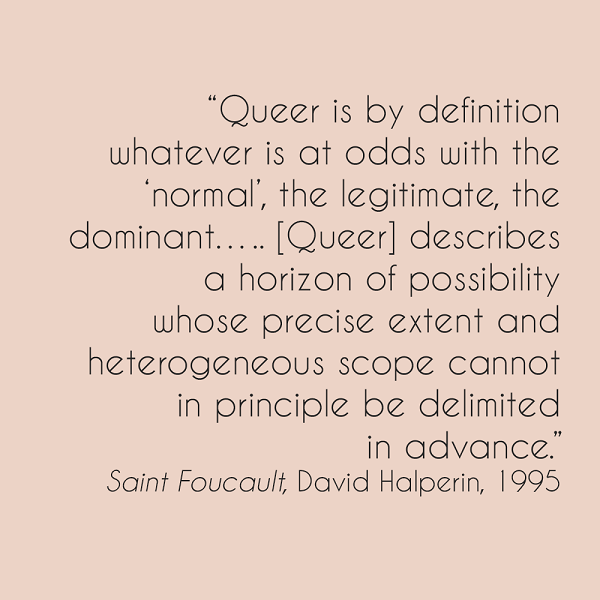 Having said that, it seems contradictive -to say the least- the inclusion of queer as an identity in the LGBTIQA+ acronym. The manifesto of Queer Nation, one of the first queer groups of that time, is a good starting point for understanding what queer is all about. Queer is constitutively anti-identitarian, a political attitude of direct action beyond lobbyism and rights discourse, a personal aesthetic of fluid and dynamic becoming that is irreducible to sexual identities such as gay or lesbian. Queer names anything that goes against the regime of normal. Queer defies the traditional understanding of politics. Queer is a grassroots coalitional politics. Queer resists a definitional closure and remains in a constant flux of becoming with others. Ironically, queer comes closer to the other term with which is interchangeable in the acronym, the questioning. Queer is a questioning of politics, of definitions, of power, of identities. Queer detests all the mantras of identity politics, such as inclusion and visibility, because it resists assimilation to both heteronormative and homonormative ways of longing and belonging. Queer takes identity to be the insidious psychic life of power that grants visibility only to be disciplined by it, the master’s tool that will never dismantle the master’s house. By reducing queer to another identity, one erases its rich history and political specificity. But is it possible to live without an identity? Is an identity all that bad after all? Can anyone afford this anti-identitarian embrace of queerness? And finally, has queer kept its promise after all those years? Maybe, queer has inevitably become another identity, a new normal?

X to conversion therapies
LGBTIQA and +